Gianna Adams is an 18 year old singer/ songwriter who comes all the way from Las Vegas. She’s a super passionate individual who’s been writing since the age of 5, Adams even dipped her toe into acting and appeared in the film Double Down at the age of 6. Gianna then went onto appear in Pharrell’s Happy music video in 2013, 2 episodes of Raising Asia in 2014 and most recently being short film First Night Of Summer this year.

Anyways Adams made her debut in the musical world in 2014. At the time she was only 13 years old and the song she released was the uplifting Work Of Art which emitted plenty of refreshing pop vibes. Three years later Gianna dropped the powerful single Human, following it up a year later was the quirky holiday original Dear Santa and this year saw the emergence of the debut I Don’t Know EP.

So April 13th 2018 saw Gianna Adams independently release the 5 track I Don’t Know EP. Smothered in plenty of pop goodness, this impeccable record spawned the singles Fallen and Shut Up. It was Fallen which kick started things, this being a fresh and funky pop jam which also featured Jehn whom provided the raps. Now this was an upbeat slice of pop bliss with lyrics revolving around falling in love “In just a minute/ You caught my eye/ In just a minute/ Had me hypnotised/ In just a minute/ I guarantee/ I have already fallen”. Those charming verses were so sweet whist Adams’s breezy vocal tones had me grinning from start to finish. Jehn’s raps actually brought something different to the table resulting in something ever so enchanting. Shut Up was pure pop with a reggae style melody. Those catchy upbeat lyrics packed a punch whilst Adams’s tantalising tones were super sassy “There’s a lot of damn things that just come out/ Of your cherry red lips/ Can you zipper them out/ Until I ask for your opinion/ Which I won’t/ Please just don’t”. Shut Up revolved around a poorly treated ex girlfriend who is taking back control. Following on you had No Hero and this being a enchanting ballad. The melody hypnotised me and those stunning lyrics put a massive smile on my face. No Hero was a breath of fresh air, Gianna’s vocal tones were candy coated which resulted in something truly captivating “Whether if it’s fire or rain/ I might be stuck in a storm/ People may say that I’m insane/ But it’s a hell of a story/ It’s a hell of a story/ Don’t need no Price Charming/ To catch me, I can handle the fall/ Because it’s me who’s got me/ So I don’t need No Hero”. On the whole this sumptuous song was a chilled out piece of perfection which put me in a trance. The Way You Do resonated plenty of sleek R&B vibes, Gianna Adams’s vibrant vocals were compelling and then you had a sultriness to the lyrics “All that I think of is you/ What am I saying/ How you’re getting me so caught up/ Cause it’s making me crazy/ Is this a daydream can you see it too/ Cause my eyes tell me that all of this is true”. Things then come to an end with piano driven ballad The Broken Ones. Adams’s vibrant were beautifully tender and those luscious lyrics were drenched in plenty of emotion.

I Don’t Know is available to purchase from iTunes 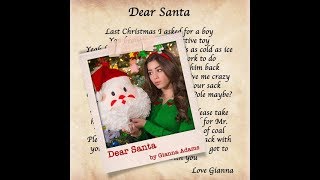